Leo Kahn, American entrepreneur, co-founder of Staples, died from complications from a series of strokes he was , 94. 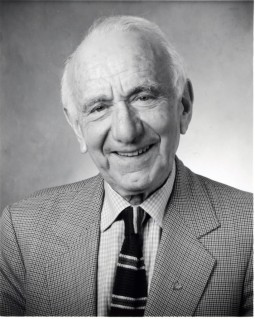 Leo Kahn was an American businessman and entrepreneur who is credited as the co-founder of Staples Inc. died from complications from a series of strokes he was , 94. Kahn is also considered a pioneer of the natural and health food supermarket industry, founding the Fresh Fields and Nature’s Heartland chains, which are now part of Whole Foods Market.

Kahn was born in Medford, Massachusetts, as the youngest of two brothers.[1] His parents, who were immigrants from Lithuania, owned a wholesale food distributor.[1] Kahn graduated from Malden High School in Malden, Massachusetts.[1]
Kahn received a bachelor’s degree from Harvard University in 1938.[1] He then obtained a master’s degree in journalism from Columbia University in New York City in 1939.[1] He worked a reporter in New Bedford, Massachusetts,[2] and practiced public relations for political campaigns until he was drafted into the U.S. military in 1941 as the U.S. entered World War II.[1] He was stationed in North Africa, Europe and Asia as a navigator for the Army Air Forces.[1]
He and his brother, Albert Kahn, took over the family’s wholesale business following the end of World War II.[1] Leo Kahn became the sole owner of the business when Albert left the company to become a professor at Boston College.[1]
Kahn married his first wife, Dorothy Davids, in 1963 and had three children.[1] The family resided in Chelmsford, Massachusetts, until Dorothy Kahn’s death in 1975.[1]

Leo Kahn continued to operate his family’s wholesale food distributor. However, he also launched a new grocery retailing division, which became known as Purity Supreme.[3] The company initially opened small groceries, but then expanded to supermarkets.[3] The Purity Supreme company also included the Heartland Foods Warehouse, which was called “the first successful deep-discount warehouse supermarket in the country” by Inc Magazine.[3]
One Kahn’s biggest rivals was Thomas G. Stemberg, the owner of a competing New England supermarket chain called First National Supermarkets. At one point, Kahn and Stemberg engaged in a price war over the lower price for Thanksgiving turkeys.[3]
Kahn sold Purity Supreme to the Supermarket General Corporation in 1984 for $80 million.[3] Through the transaction, Kahn became the chairman of Supermarket General.[3] Privately, Kahn regretted selling Purity, saying he missed the interaction with his employees.[1]
Leo Kahn died at the Springhouse care facility in the Jamaica Plain neighborhood of Boston from a series of strokes on May 11, 2011, at the age of 94.[1]

This entry was posted on June 23, 2011 by kterrl. It was filed under great stuff to know, Uncategorized and was tagged with American entrepreneur, celebrity deaths, co-founder of Staples, Leo Kahn, stars that died.